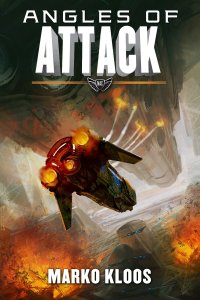 in the same series is always a gamble. I have had some series that have started off promising and just petered out after a book or two (see any of my reviews on books by David Weber), and occasionally find an author that not only can write a good story, but does so consistently. These are the authors that I love to review and recommend to others. Marko Kloos is one of these authors.

I’ve been waiting for the third book in this series to come out. It’s military sci-fi at its finest. Often you have stories of mud-stomping marines that is limited to some distant planet, or you have swashbuckling interstellar space battles that span systems and perhaps even galaxies. Rarely do you get one that is able to do both AND make you care about the plight of the main character. Marko Kloos is able to do this.

Angles of Attack continues the story of Andrew Grayson, marine staff sergeant. The Lankies, those aliens who are very tough to beat, trap a coalition of former enemies on a planet with diminishing fuel, ammunition and food, and force them to run the gauntlet home to Earth. As I said, there’s good action, but good characterization too. And all in all, a good time was had by all.

If you’re into military science fiction, you have got to look into this series. I give it five stars out of five.