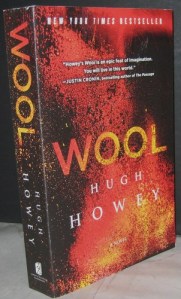 I have a new theory when it comes to book publishing.

Well, it’s actually not that new. I’ve been thinking about it for the past year. At 18 months in the indie book business, I am still an adolescent when it comes to publishing. I continue to read advice from other indie authors. Some of it is a repeat of what I have already heard or learned on my own. Some of it I consider just plain wrong. And some of it actually makes sense.

Twice now I have heard an author state that success in indie book publishing really is tied to having lots of titles under your name. The premise is that if someone likes one of your books, they will look for more of your titles, and theoretically, buy them.  That’s a really good reason to avoid using a penname. And it makes sense to me. I call it critical mass.

But there is another good reason to keep putting titles out there. I read an interview this weekend with Hugh Howey, the author of the bestseller Wool. The article was eye-opening for a couple of reasons. First, he tells that his original story for Wool was a novella that he made available on Amazon for 99 cents. It started off slow but word of mouth kicked in and he started realizing that the story was taking off. He added to the Wool story and eventually was 3,000-5,000 e-books a month. He got an agent and started approaching traditional publishers, and got multiple offers for a contract, two of them in the seven-figure range. But he had a plan, and eventually he got a contract that allowed him to continue to sell e-books independently. This is a boon to indie authors, because for us, that’s where the money lies.

But beyond the precedent-setting contract that Howey got, what got my attention was that Wool wasn’t his first book. It wasn’t even the one that he spent most of his time and energy on, at least initially. It was a novella, a very small book. But something clicked with his readers. And that’s more of that critical mass concept. If you keep writing, keep publishing, keep getting your titles and your name out there, eventually something will click. It may take just one title, or it may take a hundred titles, but just like a room full of monkeys with typewriters, eventually War and Peace will appear.

The other lesson I am learning from this, and from my experience in general, is the value of reviews. I have tried lots of things for promotion–advertising on Facebook, promoting myself on Twitter and Goodreads, giving away books–but the bottom line is that people decide whether they will buy your book based on other people’s reviews. And they are less likely to base that on how many stars you get and more on why those reviews gave you five, or four, or three stars. So that’s where my focus lies these days. I am committed to getting as many honest reviews as I can. So if you’re willing to promise an honest review of one of my books, let me know and I will gladly send you a copy….

It’s been a busy summer so far, and I have lots of projects going in lots of directions. I have some writing ideas floating around in my head, which I have yet to put on paper. And I am finishing up the editing of The Heretic, which comes out this month. Beyond that, my projects are painting our bathroom, remodeling my office, and painting my back deck.

So in the meantime, in the words from one of my favorite computer games: “Stay frosty.”

One thought on “Critical Mass”