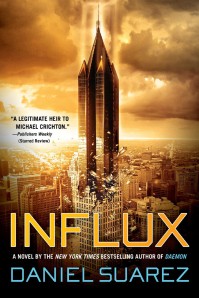 It’s hard to tell you how much I like this book, simply because it is one of those books that will have to include some spoilers if I describe it too much. But wow, it has become one of my favorites and Daniel Suarez is definitely one of the authors I will be following from this point on. What’s interesting is that he doesn’t classify his writing as science fiction, but rather “techno-thriller,” and has been likened to Michael Crichton, the late author of Juraissic Park. Here’s what one critique says about him:

“You’ll hear a lot of reviewers compare Suarez to [Michael] Crichton, including me for his previous book Kill Decision. And Suarez deserved the honor in the truest sense…he had achieved a truly Crichton-level of storytelling. But with Influx, Suarez becomes the master, and Crichton is the one who is honored by the comparison.” – Stephen L. Macknik, Scientific American

I came across the book on Amazon, and the premise caught me right away. It is: what if the world was more advanced than we know? Suarez creates a secret agency of the U.S. Government, started right after World War II, whose purpose is to hide away any technological development that would be considered disruptive to society. So when the protagonist, Jon Grady, invents a “gravity mirror,” he is promptly whisked away. He is given the option of joining the Bureau of Technology Control or go to prison. He opts to go to prison. In the pages that follow, you learn that other technology invented since 1945 include fusion reactors, a cure for cancer, genetic enhancements, artificial intelligence, and the list goes on. Finally it comes down to a confrontation with a Federal Government that has become aware of the danger of this secret Bureau, and an organization that has unlimited funding and technology 80 years ahead of everyone else.

Suarez does a good job of pulling all the elements together seamlessly, creating a world that is mind-boggling, yet not as farfetched as it sounds. He has a firm grasp on the technology and the technobabble that goes with that technology, and he helps those of us who don’t know the physics of gravity understand it better.

It’s always fun to discover an author that you can mine for more good books. I am glad I discovered Daniel Suarez.

I give this one a hearty five stars (out of five).

One thought on “Review: “Influx” by Daniel Suarez”