It’s time to revisit The Great Adventure Manifesto, in which I try to spell out what I believe, and my marching orders for my writing from this point on. Item one is:

Did you know that nowhere in the Old Testament Book of Esther is the name of God mentioned? And yet, of the many books written in that and later eras, it was included in what we consider the Holy Scriptures. In case you don’t know, Esther is the story of Israel’s captivity by the Medo-Persian Empire (who had defeated the Babylonians, but that’s another story). Esther was a girl chosen among all the girls of the kingdom to become the king’s wife, based on her beauty. She rescued her people during difficult times. The entire story is simply that, a story. There is no preaching, no effort to project the lesson there to other times and places. But anyone who reads the story can see that it has a message that goes beyond one girl in a foreign land a long time ago.

Stephen Lawhead, a Christian novelist (and if you haven’t picked up any of his books, you need to), stated once that it doesn’t matter what we write; what we truly believe will come out in the story. He uses the example of J.R.R. Tolkien, a Christian himself and a good friend of C.S. Lewis (all writers you need to read!), who didn’t set out to write a books series that would later be viewed as having many Christian metaphors. Instead, he started out by creating the language of elves, and then decided to build a world around the language. When someone asked him what the meaning behind The Lord of the Rings was, what he was really trying to say, he replied: “Sometimes a story is just a story.”

But stories are more than that. Sometimes we choose a story to say what we believe, simply because people are most likely to listen if we do. Otherwise, we just want to tell a story. In either case, stories do more than entertain, although entertainment is a lofty goal in itself. 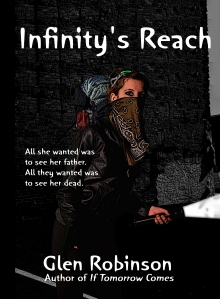 When I first came up with the idea of writing a modern-day version of Pilgrim’s Progress, I was intimidated by the idea. I knew that my scholarly friends and those who were intimately familiar with the original story would find issue with my version. I wanted it to follow the original, have a spiritual message, but most importantly, I wanted the story to be entertaining. For in this day and age, if a book isn’t entertaining, it will never convey its message, simply because people won’t read it.

And so, despite my own reservations, I wrote Infinity’s Reach. It is the story who is rescued from a prison camp two years after a nuclear war has hit America. She goes on a trek across a devastated America looking for her father. It is a story in its own right, but again, it shadows the great masterpiece Pilgrim’s Progress. Here’s a scene from the first chapter. Infinity and three of her friends are in what they believe is a resort on spring break, when a man outside the fence warns them not to drink the champagne being offered to them:

“What if he’s right?” Infinity said.

“What if there’s something wrong with the champagne? What if this place really isn’t a resort?”

Kimmy laughed out loud. “Now you’re really trippin’. That guy is just some crazy man up there on the hill. And you’re going to believe him?”

“I don’t know. Maybe,” Infinity said, the frown returning to her face. “Tell me, Kim. You paid for our rooms, right?”

“Marcie, how long have we been here?”

“Isn’t a spring break only supposed to last a week?” She turned to me.

“Ellie, do you remember how we got here? Did we take the train? Fly? Drive?”

I couldn’t answer her.

“Something is definitely wrong here,” she continued. “It’s all exactly right. I’ve been worried about it for several days now. Nothing is this perfect. Nothing.”

I turned and saw that Kimmy was already drinking the champagne, and as I watched I saw Marcie raise her glass as if to drink too.

“Sweetie, you worry too much,” said Marcie, the drink poised an inch from her mouth. “The boys are gorgeous, the sun is wonderful, the pool is clean…and the champagne is the most tasty I have ever had. Even if something is wrong, I don’t want to know about it.” And then she joined Kimmy in drinking the rest of her champagne.

Kimmy and Marcie wandered off in search of escorts for the evening, but I stayed with Infinity, who continued looking off into the distance at the stranger. I watched her for a long time, the two champagne glasses still held in my hands. Finally she handed the opera glasses back to me. I looked at the man on the hill and read his message:

I CAN HELP YOU ESCAPE.

The decision to trust the Stranger and leave the resort set Infinity on her trek across America. It’s just a story, but I believe it also reflect my own views of spirituality and The Great Adventure that is God’s Calling.

Stories have great power, and we have an obligation to use that power wisely. How will you use it?