Harry Turtledove is one of my favorite authors, and is considered the father of alternative history. He is a very prolific author, and has several series, all dealing with the what-if of things that could have happened that didn’t. 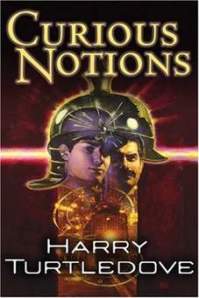 The Crosstime Traffic series is based on the premise of a world with depleting natural resources that also discovers the existence of alternate world. They develop a machine that helps them travel back and forth. They use that machine, and the teams that travel with them, to trade simple, but high-technology devices, with the other worlds in exchange for food and other things needed, while keeping the idea of cross-dimensional travel secret. Curious Notions is the name of the shop out of which they sell their items. The book tell of a father and son who travel to an alternate history San Francisco where Germany and the Kaiser won World War I and went on to conquer most of the rest of the world.

The series is, as far as I can tell, also Turtledove’s attempt to break into the young adult or possible the teen market. Each story includes at least one teen character—usually two, a boy and a girl—who travel with their parents into the alternate world. I have read a few of these books and the one reviewed here is just the most recent one that I have read.

After writing so many books, one would assume Harry Turtledove has mastered the skills necessary to be an author. But in Curious Notions and his other Crosstime books, Turtledove has a bad habit of talking down to his reader, presumably a young person. The main characters are 17, but Turtledove is so far removed from that age, I believe he has a difficult time talking to them on the same level. The language is stilted and I felt like it was the words of someone who was telling a story to his estranged grandchildren.

The young adult market is hot right now, and several adult authors have tried their hand at writing in that genre, such as James Patterson. But writing in a genre and age bracket you are not familiar with can be challenging. And unless you spend a lot of time with readers of that age you ending up with language that doesn’t reach them. I don’t think Turtledove has really mastered that, and I suspect James Patterson hasn’t either.

I give Curious Notions three out of five stars.