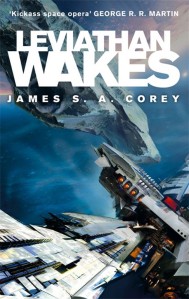 I was first attracted to this book when I heard that the SyFy Channel was coming up with a new series this year based on a book collection called “The Expanse.” Leviathan Wakes is the first book in that series. It’s classified as space opera, which generally means its an adventure written in the context of space.

In this situation, the story is told by two men: James Holden, an executive officer on a ice freighter hauling water in the form of glaciers from Saturn’s rings to a colony in the Meteor Belt on the other side of Mars. The other man, Detective Miller (seriously; it never gives his first name!) works for a security firm that has taken the place of police on the colony of Ceres, which consists of a colony inside a meteorite. Miller is hired to find and kidnap a girl; Holden’s ship answers a rescue call and promptly gets destroyed as well. It takes a while for their crosses to path, but they inevitably do.

The universe described is fascinating because it’s believable yet fantastic. This is a solar system we might be living in in a few hundred years, with Earth overpopulated and Mars the new rising power. Spaceships don’t zoom or instantaneously go from planet to planet; even with special drives it takes weeks to get where you’re going. The outer planets are the slums, inhabited by adventurers and those too poor to go anywhere else. The characters are credible and interesting, the dialogue is fascinating, funny and intriguing, and there are scary and exciting parts.

But “bipolar” is probably the best word to use to describe this book. It reminds me of the Katy Perry song, about a guy being hot, then cold. The book starts off with a bang, then promptly leaves you with 200 pages of slogging. Remember that this book is 582 pages long, and even though the beginning showed promise, the book bogged down after the first 50 pages. More than once I almost put it down. And then it took off again at the 50-yard line. The last half of the book doesn’t disappoint.

The good parts of this book are great; it’s just those pages from about 50 to 250 that are slow. I suspect that when it shows up on SyFy they will cut that section to the quick, but then, you never know.

It is promising to be a great series, but watch out for the slow parts. I give it four out of five stars.