One of the things I thoroughly enjoy about being an indie author is being able to do as much of the process myself as I would like. That includes writing, editing, formatting pages, doing covers and promotion. The down side to that is obvious, of course. You get what you pay for. I have a background as an editor. I also have inherited a “do-it-yourself” mentality from my father, which is often hard to shake. And the reality is, I just plain like doing it myself.

But sometimes, doing it yourself is not the way to go. I could probably build a house, when it came down to it, but I am not sure I would want to live in it. And I’ve learned over the years that there are times when you have to step back and let the professionals take over.

My indie history is filled with do-overs. Here’s a good example: Tom Horn vs. The Warlords of Krupp. We started off with a cover that featured a photo of the actual Tom Horn from history, then added a Thompson machine gun to give it that tongue-in-cheek flavor. In the end, the idea didn’t work that well, and the cover flopped. What worked much better was when we found graduate student and artist Mateusz Ozminski, who was willing to paint us a steampunk cover for our new and improved Tom Horn cover.

I was able to locate via a website called DeviantArt, and I used that site for other cover art, such as the covers to The Heretic and Elijah, by finding existing art and paying for permission to use it. Another cover I did that for was my recent book on Jonathan entitled Chosen. But it wasn’t the same. There’s nothing like having art actually created for a cover.

Then during my recent collaboration with Celeste Perrino-Walker on the project Salome’s Charger, she introduced me to Lori Follett at Wicked Book Covers. Lori had done many of Celeste’s previous covers, and Celeste was a loyal customer. I noticed right away that most of the covers were for books directed at a woman’s audience, and I wondered if Lori would be able to do a cover that would please both of us authors. 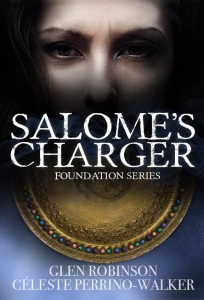 Not only did Lori provide a great cover, she made revision after revision and charged no more than what I was already paying for my substandard covers. I was impressed with the new cover for Salome’s Charger (by the way: today’s the last day for a giveaway on Goodreads for autographed copies of Salome’s Charger! Just a heads up!) That got me thinking: why not take advantage of Lori’s talent to upgrade some of my existing books and see if that will draw more attention to them among readers?

And so that’s the plan. Our first target is Infinity’s Reach. Lori and I agree that the original concept for the cover was sound, just poorly executed. I’ve given her the directive of giving Infinity a facelift. I also won’t be disappointed if she decides to go in a totally different direction. So let’s see what happens. I’ll keep you posted in weeks to come!