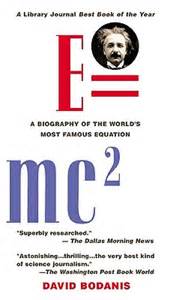 E=mc2: A Biography of the World’s Most Famous Equation by David Bodanis. Walker Publishing. 337 pages.

In my ongoing book research and quest to understand what the nature of energy is and how its state differs from that of matter, I came upon this book. I am not a physicist, nor do I play one on TV, so I was looking for something that would help me understand in layman’s terms a formula all of us know by heart but very of us comprehend at all.

What I got was a fascinating look not only at what each of the segments of the equation represented, but a biography on Albert Einstein, what led him up to his discovery and helpful stories of other physics pioneers such as Isaac Newton, Michael Faraday, Galileo, and others who led up to the formula that ushered in the nuclear age and changed our world forever. In addition, it had an intriguing section on the Nazi heavy water production in Norway in World War II and the Allies continuing efforts to destroy their plant in an impregnable location.

What’s also nice is that rather than bogging the book down with ancillary information that not every reader might want to slog through, it focuses on the basic story that most people might want to hear. Then at the end, it offers up an appendix, telling more about the physicists and other individuals that are talked about in the book, and what happened to them later on in their own stories. After that, it also includes an extensive notes section that fleshes out the information provided in the main part of the story for those who want more. A lot of it is fascinating reading.

I have to say I got what I was looking for. E=mc2 helped me understand energy in ways that I never did, and was a great help to my research. It was also very entertaining to read.

I give it five out of five stars.