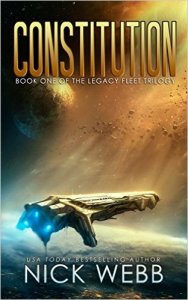 Decades after a war against aliens almost destroyed the human race, the last of the old line of fleet ships who held the line against the invaders is about to be turned into a museum. And with it, the aging captain and his first officer are looking at mothballs as well. But there is a conspiracy at play, and the alien race that had mysteriously disappeared has come again, destroying all of the modern human spacecraft that had been specially prepared to meet them. It is up to the Constitution, once again, to hold the line against the aliens who are bent on destroying humanity.

If the storyline sounds familiar, it’s because it is. Those who are fans of the TV series Battlestar Galactica will recognize many of the same elements. The story starts off with many of the same cliches that I’ve read before, and even the dialogue is stiff. And to be honest, I almost stopped reading it about ten pages in for that very reason. But then I went back to its Amazon page and saw more than a thousand favorable ratings and wondered if they saw something I didn’t see. And so I kept reading, and the story got better.

What I ended up getting was a fast-paced, high-action story that never lets up. The body count is high, the characterization leaves a lot to be desired, but the story is fun. The captain is forced time and again to make hard choices that cost people their lives, but end up saving countless others in the process. If you like space military sci-fi, especially space battles, this is a likely candidate. One plus is that it is available (for now) as a free entry in the Amazon Prime Lending Library.

Like I said, it’s strong on action but weak on characterization, so I give it three stars out of five.