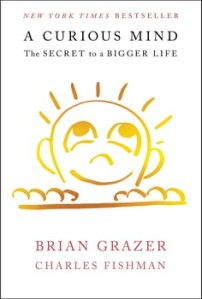 A Curious Mind: The Secret to a Bigger Life by Brian Grazer and Charles Fishman. Simon & Schuster. 320 pages.

I previously finished reading a 900-page novel that became ponderous in the last few hundred pages, so it was a delight to pick up this smaller book. And even though Amazon says it clocks in at 320 pages, it didn’t read that way. Brian Grazer is a famous Hollywood producer best known for his projects in collaboration with Ron Howard. This book, under the guise of talking about curiosity and how it plays a part in his success, goes on to talk about Hollywood as well as many other successful people. One of Grazer’s hobbies is simply talking to famous people, and at the end of the book, he provides a massive list of the people he has talked to over the past few decades. As you can imagine, he has talked to every celebrity you can think of, but he doesn’t list them. He does list heads of state, important scientists, authors, billionaires and other thought leaders.

Grazer starts off by talking about how he got his first job in Hollywood simply by overhearing someone saying that he had quit a great job at a studio and that it was available. Even though he was studying to be a lawyer at the time (something he never finished), he applied for the job and got it. Most of what he did was deliver scripts to various people. He made it a point to always deliver the package to the person listed on the cover. That way he got to know lots of people in the industry.

What got him starting to meet people was his own insatiable curiosity, and he believes that has been the key to his success. He gives pointers on how to use it both creatively and constructively. The book isn’t earth shattering in its significance, and it doesn’t set out to cure cancer, but Grazer has some good pointers for those who want to get ahead in life, especially those of us who need the attention of other decision makers to succeed. It’s worth a read.

I give it four and a half stars out of five.