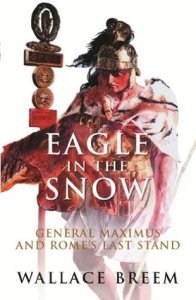 I’ve never read Gibbon’s The Decline and Fall of the Roman Empire, even though I thought I would like to one day. The two main reasons why I want to read it is because (1) I think the book series could tell us a lot about what we are experiencing here in the United States right now; and (2) I like hearing the history of the Romans.

Eagle in the Snow gives me both of these benefits, and I don’t have to wade through thousands of pages. To be honest, this is the third time I’ve read this book. I stumbled upon it on Amazon just a week or so ago, and seeing the Kindle version for just 99 cents, I couldn’t pass it up. I had been reading a book that was a Hugo and Nebula award winner, but couldn’t keep my interest. This book I couldn’t put down.

The story is about Paulus Maximus, and follows him through his military career, first on the frontier in Britannia, where he serves with distinction, then later in Italia, and then in Gaul where he is ordered to raise his own legion of 6,000 men. After he trains them, he marches them to the frontier on the Rhine River where he is faced with holding off five Germanic tribes with hundreds of thousands of starving people. He uses skill, intelligence, leadership, and guile to hold them off for 500 days until the waters of the Rhine freeze over. And then the final, incredible battle begins.

Eagle in the Snow is not only a must-read for those who love stories about Rome. It’s a must read for anyone interested at all in military history, or in the parallels between Rome and today’s American society.

Five stars out of five.