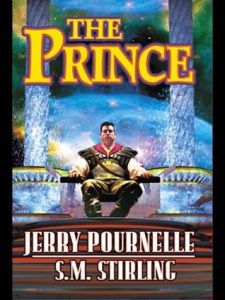 Once again, I am going to indulge in my secret pleasure of military sci-fi and do some reviewing. But this time, I am going to go back and review the Godfather of them all: Jerry Pournelle.

Back in the 80s, I was a young man working in hospital PR and living outside Chicago. I remember distinctly taking my family for a weekend to the Wisconsin Dells and taking along a paperback copy of the book, King David’s Spaceship. It was my introduction to Jerry Pournelle and his series featuring the universe of the CoDominium and John Christian Falkenberg. It was also my introduction to military science fiction. His writing not only influenced my taste in science fiction but my own writing, and he quickly became one of my favorite writers.

Pournelle co-authored quite a few books with Larry Niven, including The Mote in God’s Eye, Footfall, and Lucifer’s Hammer, one of my favorites. You’ll notice that the last two books in this series were co-authored by S.M.Stirling, another great writer, who I was introduced to through Pournelle.

Recently, I read online, I think it was on Goodreads, that the book Falkenberg’s Legion was part of a series. I checked my library and discovered that I only had two of the books in the series, so I got on Amazon and bought the other two. That’s where I discovered that the entire series had been combined into one book entitled The Prince. 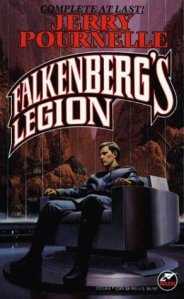 Learning this, I had to take it upon myself to reread the entire series. And then rather than review each one individually, I decided to review them here together.

First, let’s explain what the series is all about. 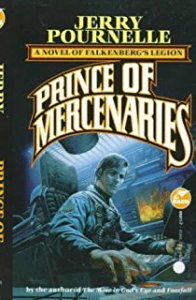 Pournelle started writing the series in the late 1980s while the Soviet Union was still going strong. His premise is that the Soviets and the United States agreed to unite their countries to form what was called the CoDominium, and from that point on dominated the rest of the world. They wanted to stop war, so they controlled all development of technology that could be used for war, which ended up being pretty much all technology. But that wasn’t before the Alderson Drive was invented, the rocket engine that allowed travel to other planet to be feasible. Soon the earth became overpopulated, and the CoDominium came upon the idea of settling colonies by forcibly sending settlers to these worlds. Some were pretty nice; most were not. To control the masses, the CoDominium developed the Fleet and the CoDominium Marines.

The story begins about a century after the CoDominium has been in power, and it is starting to unravel. John Christian Falkenberg is a teenager growing up on the streets of Rome who gets into the Fleet, then gets switched over to the Marines. After a heroic act that saves lives yet costs the life of a nephew of a senator, Falkenberg makes both friends and enemies in high places. Falkenberg is kicked out of the Marines, and starts his own group of mercenaries based on the same regiment of marines he commanded.

The first book, Falkenberg’s Legion, as it is in most series, lays the foundation for the series, and is very straightforward. It’s probably my favorite of the series, perhaps because I’m nostalgic too. It really focuses on Falkenberg as a young man and just as the Legion is getting established. 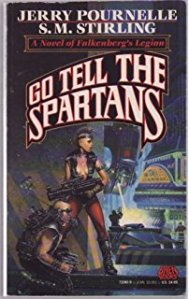 The second book, Prince of Mercenaries, introduces Lysander Collins, prince from the planet Sparta, who comes to Tanith, a hot jungle planet seeking to hire Falkenberg and his legion to help his planet train soldiers and get rid of rebels there. It deals less with Falkenberg and more with people around him, which I found became more and more the case with the series. You would think with Collins being a prince that he would just stand around and wait for others to do things for him, especially in a war setting. And that’s what Falkenberg and he legion thought as well. But Collins is from Sparta, where everyone is trained to be a warrior. He takes a very active part in the events on Tanith, and wins the respect of Falkenberg and his team.

The third book, Go Tell the Spartans, focuses even less on John Christian Falkenberg. In fact, despite part of his legion being on the planet Sparta to train soldiers and fight, Falkenberg is not in the story at all.  Instead, book three and four (Prince of Sparta), really focus on the planet Sparta, ostensibly while Falkenberg is taking care of a war happening on another planet. But it all happens in the same universe, and many of the same people are either mentioned or are active in the story. These stories deal with the monarchy of Sparta trying to suppress rebels that are being supplied heavily by the same senator who is trying to get rid of Falkenberg.

On the plus side, Pournelle style is not your blood-and-guts, sweat and grunt military story that’s told from the trenches. It focuses on strategy and tactics from a captain, major or colonel level, and so it is very different from many military sci-fi stories out there. Pournelle probably doesn’t have the emotional involvement with his characters that some might have, but much of this genre doesn’t focus on that anyway. It’s more like a chess match, and that’s a satisfaction in itself. Even after decades of having these books sit on my bookcase, they’re still a good read.

On the negative side, I found that as the series wound on, the books took longer and longer to set up. Book three (Go Tell The Spartans) seemed like it would never get started, then about 2/3 of the way through suddenly exploded. So you will need to be patient. But if you’re looking for some classic military sci-fi that’s not your typical kill-a-bug type of story, you can’t go wrong by going back to the original.