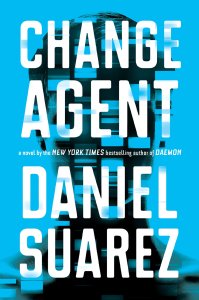 I’m a big fan of Daniel Suarez. I consider him the worthy successor of Michael Crichton in the genre of techno-thrillers. If you don’t know what a techno-thriller is, think of Crichton’s books: Congo, Andromeda Strain, and even Juriassic Park. Generally it includes books that speculate about science, but aren’t so far away from reality that they are automatically considered science fiction.

Other books that Suarez has written–and I have loved–include Influx, Freedom, and Daemon, all which I highly recommend. You can find their reviews elsewhere on this blog.

This book deviates from his traditional formula of telling a contemporary story using modern technology to talk about genetic editing in the year 2045. Kenneth Durand leads an Interpol team in south Asia hunting down black market labs that perform “vanity edits” of human embryos for a price. While genetic editing is approved to rid unborn babies from diseases, some people want more, including babies that defy normal human description.

One man is behind it all: Marcus Demang Wyckes, leader of the powerful cartel known as the Huli jing. With Durand on their trail, the Huli jing and Wyckes try a desperate and unbelievable gambit: they dose Durand with a radical new change agent, causing him to go into a coma only to wake up weeks later with the face, body and DNA of Wyckes. Now a fugitive, pursued by Interpol, Durand is forced to find a way to return to his old appearance, rescue his family and capture Wyckes.

It’s a very ambitious story, and that’s exactly the problem I have with the story. Suarez has never backed down from telling sensational stories in believable, incredibly detail, and this is no exception. But dealing with something as technical as genetic editing 28 years in the future means that a lot of information is hard to process. And in this story, I believe, Suarez gets so caught up in the technology that he loses the humanity of the story. In other words, there’s not enough characterization. For some readers that’s not a problem, especially if you’re fascinated with the idea of genetic editing. But if you just want a good story, it might hold you back.

Don’t get me wrong: Suarez is a great storyteller, and there’s lots of thriller to be had here. I just wish it was a little lighter on the technology and more on the character. I guess there’s a lesson there for my own writing.

I give it three and a half stars out of five.