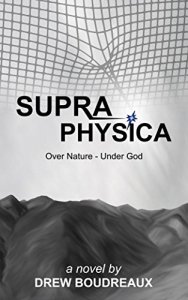 In the process of interacting with a group of fellow Christian speculative fiction writers on Goodreads, I met Drew Boudreaux, who convinced me to read and review his book Supraphysica. It had two things in it that I really like (actually more than that, but I digress): angels and science. My understanding is that Drew is both a geologist and a Christian, which would make him a very interesting person to talk to at a party. Here’s the Amazon description of Supraphysica:

For Philip, a sociology student at N.Y.U., January 25th was supposed to be a normal start to the spring semester. That definitely didn’t happen. As the day unfolded, he came to faith, unknowingly befriended an angel, and was recruited into a covert project to literally build a new world. The next two weeks were equally paranormal—yet a lot more trying as Philip’s newfound faith is stretched nearly to the point of nonexistence.

Join Philip, Encar, and their respective families in this modern story of faith, hope, and love—and a healthy dose of geoscience.

That pretty much explains the story. A group of young people is recruited by angels to be involved in the creation of a new world. The author does an excellent job of seamlessly blending the requirements of science and the expectations of faith into a universe where they can co-exist. It’s a fascinating, unique scenario, one that I haven’t seen before. One thing that the author is very good at is being thorough, and if you’re interested in plate techtonics and other geology stuff and how they would fit into a week-long creation, this story offers a lot for you.

In addition, the author brought some good Christian principles and concepts into the story, something I see lacking in a lot of Christian fiction these days. And it wasn’t just spouting Christian dogma, but dealt with issues relating to individuals’ relationships to God.

That’s the good side. On the side that needs some help? I found it dragged through the middle. While there was lots of good information, the author’s ability to tell a story was lacking somewhat, and there was no real climax to the story. There were two main characters, Philip and Encar, who develop a relationship, and that keeps you interested somewhat. But there just wasn’t enough conflict, I guess. There was one good surprising scene in the hospital about 3/4 of the way through.

The premise was terrific, I need to say that. And I thought it was well supported by factual information. I just wanted more story, more drama, I guess.

I give it three stars out of five.