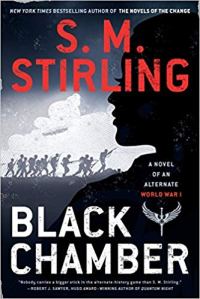 I’ve had a bad run of luck with books lately. Whether it’s just me, just a bad choice in books or the nature of books these days, I couldn’t seem to get interested in and finish a book for the better part of a couple of months, which is a lifetime for me. When I got to Black Chamber, I snatched it up, being familiar with the author and loving his work. At last, I thought, the drought was over.

S. M. Stirling is known for many books, but he’s best known for alternate history novels, including his Change series, where a supernatural occurrence off the coast of Nantucket makes it impossible for electricity and gunpowder to work in the world. Lots of fun there.

Black Chamber is set in a world where Teddy Roosevelt is reelected as President in 1912 by the Progressive Republican Party, which makes some significant differences in the country, including an invasion of Mexico. The story takes place in 1916, with the Black Chamber signifying a spy organization helping the U.S. get ready for the war in Europe. (By the way, I looked Black Chamber up on Wikipedia, and there actually was such an agency starting in 1919, which was the precursor to the National Security Agency.) The main character of the story is Luz O’Malley Arostegui, a Black Chamber agent who assumes the role of a Mexican agent and infiltrates the German High Command. There is rumor that the Germans have a weapon they are going to use against America, and it is up to Luz to discover what it is and to stop them.

The story is very rich and detailed, and demonstrates an incredible amount of research. Much of the story is written in Spanish and German, since that’s the language the characters are actually speaking. But that’s probably where the story goes wrong. Stirling falls into the trap of losing sight of the entertainment factor in the story, and get caught up in all the information he feels he needs to share.

I once wrote a book on Nikola Tesla, then promptly started work on a sequel that involved two scientists discussing the electromagnetic spectrum. I thought their dialog was essential to the story, but my beta readers later told me that they blew by that part of it, finding it unnecessary and boring. That’s what I found here.

Stirling needed to spend more time getting us to like the main character, Luz. We needed to have more adventures, more excitement. Instead we got lots and lots of exposition that made the world he created more vivid, but slowed the story way down. It also made it less interesting, from my perspective.

I give Black Chamber two stars out of five. Sadly.