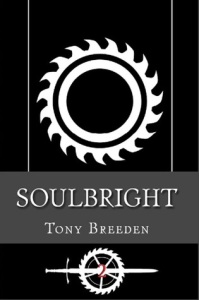 I picked up this book as part of a Christian Speculative Fiction thread I belong to on Goodreads. It’s probably not one that I normallly would have read on my own, but sometimes getting out of your comfort zone is good for you. Here’s the summary from Goodreads:

Monster hunter. Anti-hero. Gloryhound. Copernicus Gallows faces orcs, vampyres, lycanthropes, technomancers, the living dead, and betrayal on his quest to find the next piece of an artifact that has the power to end his most powerful foe: Impunus, the brat prince of vampyres. For glory or death. To win the prize and foil an ancient prophecy that spells doom for his quest, Copper must brave the Accursed City of Mot Hadrall. Described a campaign killer and a gamer’s graveyard, the City of Eternal Night boasts an 85 percent kill rate. Armed with a bloodthirsty render and an iron resolve, Copper will face his greatest enemy in Mot Hadrall’s Dread Quarter: his own dark heart.

Soulbright is the second book in a series, and because it is so as well as a somewhat lengthy book of its own, plus involves a great deal of world building, it is massively complex. Not only does the reader need to navigate the world within the game where anything conceivable can happen (because, of course, it is a game), but a futuristic society where mutants are pervasive and are yet discriminated against. It took me some time to get a handle on what was going on, especially as it jumped back and forth between worlds.

That being said, this is some masterful world building. I imagine that the universe created here took the author years to imagine and refine, and it seems to work well, although I had some quibbles in the game world when things that were integral to the story were introduced without much advance warning. I’m a gamer, but I guess I’m not playing the right games to follow along completely.

At first, I was concerned about the spiritual aspect of the story, since this is Christian Speculative Fiction, that is, whether there would be one. But that comes along strongly and appropriately toward the end, and I appreciate how the author weaves it into the overall theme.

It’s got great characterization, great action and a good storyline. I wish I would have read the first book ahead of this one, but it’s not totally essential. There were several points where I felt the book needed the touch of a good editor for proofreading and tightening up the verbiage. But all in all, it’s a book I can recommend.

I give it four stars out of five.