I wasn’t a stranger to the operating room. I worked at Hinsdale Hospital in Illinois and often took photos there. But today was special. When Melissa came into the room, it was in the hands of a physician who grasped her carefully, the umbilical cord wrapped around her neck until he slipped it over her head. She cried without prompting, and I was able to watch her above the curtain they put up between where I sat next to my wife’s head and where the cesarean section was going on.

The nurse took her away for a few minutes, cleaned her up, took an imprint of her foot and then brought her back.

“Would you like to give Melissa her first bath?” she asked me. My eyes grew big and I nodded, surprised. A minute later, I was in the next room with my infant daughter, bathing her for the first time. Father and daughter.

I would like to say our relationship was always smooth after that. It wasn’t. I made mistakes, as fathers are prone to do. And she made mistakes, for that’s how one learns and grows.

There was the time I was swinging her as a one year old between my legs by her hands and her elbow came out of the socket. We rushed her to the emergency room and ended up spending a whole day there. The doctors tried everything to get her to reach with that arm so she would put it back in, including offering her ice cream. But by that evening, it was still out of place. We ended up going home with her arm in a sling. That night, we woke up with her standing at the edge of her crib, the sling off her arm, and her elbow mysteriously back in place.

She grew up idolizing her brother, until she didn’t. Matthew is 2 ½ years older than her, and it was natural that she would follow him around. But at some point, she realized that he wasn’t always a well-meaning brother. That’s when they began to fight like cats and dogs, or more accurately, like a brother and sister. 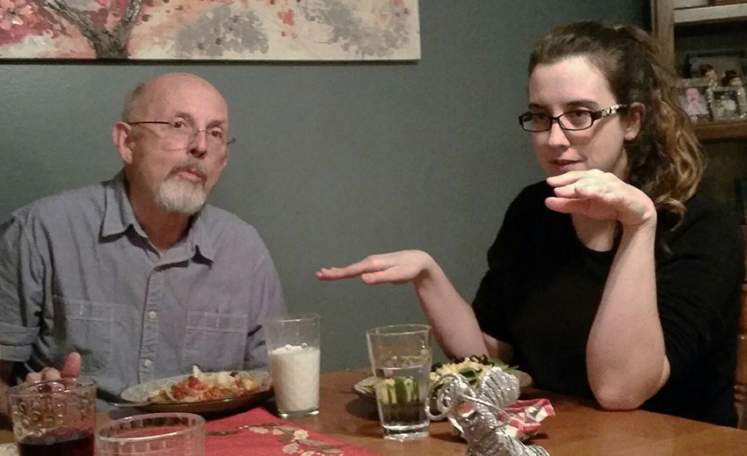 As a teenager, she measured everything she did by as a comparison with her brother. When she was sixteen, she asked to go camping alone with three girlfriends. I told her no. She was upset, complaining that I would let Matt go if he asked to. She never quite understood that the rules for an eighteen-year-old boy weren’t quite the same as those for a sixteen-year-old girl, regardless of how fair you want the world to be.

She has the tallness that comes with my side of the family. She has the compassion, quiet demeanor, and need for privacy of her mother. She has my intelligence, and fortunately, more humility than I have. She also has a determination and a courage that comes from somewhere I don’t know.

When her brother Matthew was involved in an auto accident at age 22, we almost lost him. He spent 17 days in intensive care and two months in the hospital. He came home, unable to walk, talk and barely able to eat. He suffered from a traumatic brain injury that he struggles with even today.

But what they don’t tell you is that TBI affects not only the person in the accident, but everyone else in the family. Melissa suffered tremendously. Matthew’s personality changed, and Melissa felt like she had lost her brother. When he came home, we struggled to figure out how to take care of him. Melissa surrendered a semester of college to stay home with him as he recovered. It was hard to take care of your older brother. It was harder still to realize that suddenly you were, in essence, the older sibling.

Melissa has her own life now, as we want her to have. She has struggled at times, as we all do. She’s been lonely, and she’s made new friends. She’s accomplished great things and suffered through great failures. But she is discovering who she is, and we are proud of her. I am proud of her.

When you become a father, the act of procreation is simple enough. What comes after is not. Being a father changes your life. It makes you more than you could ever imagine because you no longer think only for yourself.

I wish Melissa the best of lives—long, fulfilling days, and warm, satisfying nights—and am grateful that God allowed her to share her life with me.

One thought on “The Other Woman”