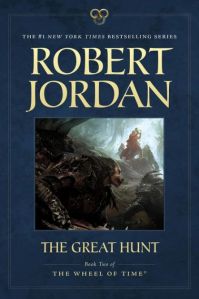 The Great Hunt (Book Two of The Wheel of Time) by Robert Jordan. Tor Books. 653 pages.

This is the second book in the classic Wheel of Time series by Robert Jordan. As I mentioned in my review of the first book, The Eye of the World, it’s taken me years to work up the courage to invest myself in this series. Two reasons and two words to describe it. Vast. And long.

The series stretches on for I believe 12 books now. I just finished book two, and I suspect I will take a break before hitting book three. As I mentioned in the review of the first book, the biggest thing the series has going for it is that it is immersive, a masterful, comprehensive view of a fantasy world that one can easily get lost in.

The Great Hunt is all about a horn that everyone is looking for, that when blown will summon an army of dead heroes to fight by your side. It is intended for the Last Battle, when good will fight against evil and destroy the Dark One. The horn is actually discovered at the end of the first book, and you spend great portion of the book waiting for it to be blown. I got to one point late in the book and wondered if the book had been inappropriately named.

But The Great Hunt reminds me of another book I read many years ago. Shogun by James Clavell. It spent most of the book talking about a war that was going to happen, that was destined to happen. It finally did happen: on the last page of the book. It was a great book, but most of the book was spent in anticipation of what was to happen, instead of seeing it actually happening.

The Great Hunt doesn’t go that far. The ending is quite good. But there were some pages when I felt like I was slogging through description, hoping and waiting for something exciting to happen. I bought the larger paperback version, knowing that my eyes would grow tired of the small print with hundreds and hundreds of pages to go.

The series is good, but I don’t think The Great Hunt is as good as the first book, The Eye of the World. And I hope that the series doesn’t go downhill from here, as many do when they try to carry the story through too many pages. I plan on reading the entire series. But not right away.

I give The Great Hunt four stars out of five.