I’ve been keeping a low digital footprint the past few days. In fact, as I think about it, I am not sure I told you much about the fun we had at our photo shoot a couple of weeks ago. So let’s start with that.

Spring semester is continuing to occupy every loose brain cell I have at the moment, but spring break will be here in a month (yay!) and summer not too long after that. In the meantime, my book cover designer–who also happens to be my son–has some time on his hands (other than a minor detail of putting a short video together, but that’s another subject), so I figured this would be a good time to get started on covers for four books I hope to launch in May. One is Infinity’s Reach, the Pilgrim’s Progress retelling I am finishing up, which is set in America after EMPs take out all technology and the Asian Coalition invades. The other three books are part of a trilogy entitled The Champion Trilogy. The story spans 22 years and is about a pastor who goes underground to fight an evil corporation whose demonic influence has affected banking, entertainment and politics in this country. (Insert pithy comment here.) 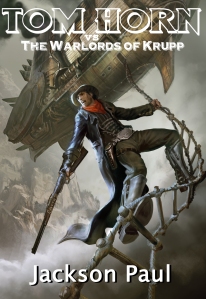 When we did the cover for Tom Horn vs. the Warlords of Krupp, I found an artist we liked and hired him to do a cover for us. The price was right, and the artist did a good job. The only problem was that it took six months to get the art from our artist.

This time around, I decided to employ a new strategy. I found art that had already been produced that I felt would work for the covers. On two of the books–the last two books in The Champion series–the artists agreed to work with us. On the other two, we didn’t have the same luck. And so we went to plan B.

We used the original concept of an artist, but we produced the art. This is perfectly legal and ethical. Creative ideas can’t be copyrighted, just the expression of those ideas. We hired a couple of my students to come to the University’s TV station for a photo shoot in front of a green screen. Our intention was to take the background photo from one location and drop the student into that background. Easier said than done. What that means is that we are still trying to make it work.

I spent some time going around the area where I live in north Texas trying to find an area that could quality as post-apocalyptic. The original art has some broken down buildings, so I looked for some broken down buildings. When we moved here 14 years ago, there were quite a few in the area. Problem is, natural gas money has given the county more cash to spend on new buildings. I ended up finding one abandoned gas station, a dump behind where Shelly and I exercise each morning, and an interesting brick facing on the back of Bill’s Bookstore in downtown Cleburne. So I figured that was a start.

Then I started collecting materials for the shoot on Sunday. The otherwise quiet and relatively conservative sophomore girl I hired showed up dressed in black leather, black eye makeup and army boots. We added a backpack, a policeman’s flashlight and a pellet gun that looks like an automatic pistol, and we were good to go.

The other photo–for The Champion–turned out to be more difficult. We wanted a photo of the hero in a dark cave holding a sword. Light is supposed to shine down from above, and unmentionable evil things lurk in the shadows around him while fog swirls around his feet. Our model, Nate, brought the right clothes and even brought a great sword. We found some free photos of the inside of caves, and I thought it looked pretty good. The trouble was the fog. I bought nine pounds of dry ice on Friday. By Sunday morning, even after keeping it in a freezer, it was down to about a pound. I rushed over to Wal-Mart, where I got the original stuff, and bought another couple of pounds.

Turns out, we had plenty. The trouble was that none of us had ever worked with dry idea before. Here’s what I learned: First, always wear gloves. It’s very easy to get burned by the very cold ice. Second, the amount of fog you get is directly related to how hot the water is that you put the ice in. Someone had the brilliant idea–me–to fill about 18 styrofoam cups full of hot water and then drop dry ice into them. It worked, sort of. I had to keep switching them out when the water got cold. Water splashed everywhere, and herding the fog from dry ice is akin to herding cats. If I were to do it again, I would get a big tub of dry ice–the bigger the better–and dump a huge slab of dry ice in it. Or maybe just shoot around a hot tub somewhere.

As I mentioned, we’re still working on covers–in between me working on school stuff and Matt working on his own video shoot. I was hoping to share with you by now the final product. Instead, I have the two covers with art from artists in Spain and Macedonia. Enjoy.