Here’s the final installation of my six points of belief taken from The Great Adventure Manifesto:

I will do my best to put it in the context of a modern, secular world, in an attempt to balance the need for education, science, consumerism, and technology as well as a conscience, a belief in God and a life that glorifies Him.

When I was in graduate school, some of my fellow students, teachers and even some of the authors of textbooks I read proposed that our modern world no longer had a need for God. Science and reasoning had taken the place of faith. I believe that now, more than ever, faith is a commodity in great need but in short supply.

Researchers in ethics have stated that morality is an issue that CEOs are constantly looking for in their new executives, while students in school often take the position that anything is OK as long as you don’t get caught. That frightens me, especially when those students are going to a Christian university. The Internet has made is easy to steal books, movies and music that doesn’t belong to you, and because it is so easy, that translates to it being OK in many minds.

When was the last time you had to choose between doing what was profitable and what was right? Which way did you go? Being a believer goes far beyond preparing for the Sweet By and By. It also means representing Jesus Christ in a world that has forgotten Him, or perhaps never knew Him.

Technology doesn’t have the answers. It raises more questions than it answers. And science may be able to answer some questions, but not those dealing with morality and conscience. Sometimes we have to rely on those stories and prayers we had when we were growing up for the answers. 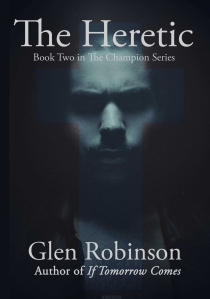 In my book, The Heretic, the second book in The Champion Trilogy, college student Douglas Washington is confronted with a dilemma when he called to choose between a path he believes God has for him, and the desires of a girl that he cares about deeply:

“Aren’t you excited? Being invited to play in a club in San Francisco?” He heard her voice rise with excitement.

“Yeah, that’s pretty flattering,” he responded, his voice not quite so thrilled.

“It’s just…I…well, we’ve only being singing together a few weeks. First we get a paying gig, now they want us to travel to San Francisco with a chance to perform where Janis Joplin and Green Day got started. It’s a bit much.”

Lila looked at him. “Are you the type that doesn’t believe in good luck? This was just a lucky coincidence.” Her face slowly broke into a smile. “That’s not taking into consideration your brilliant guitar work and my fantastic singing.”

D.J. grinned back at her. “Yeah, there’s that.” He shut his guitar case and flipped the latches shut. “I don’t believe in luck, no. I do believe in providence. I believe in a God who gives us chances, who leads us where He wants us. It’s up to us to decide if we will go where he wants us, though.”

Lila smiled. “So? This is God’s gift to us. He wants us to be famous.”

“How could this not be good for us?” D.J. heard Lila’s voice rising. He could tell she really wanted this.

“I don’t know,” said D.J. “Just a feeling, I guess. I’ve never been one to make decisions quickly. A personal flaw.”

“Look,” Lila said to him, turning his chin to face her. Man, she’s beautiful, D.J. found himself thinking. “This is a once-in-a-lifetime opportunity. We take it, or we pass up on it. If we take it and go, we perform and that’s it. If we say no, we’ll probably never get another chance.”

D.J. found himself staring into her eyes from just a couple of inches away. They sat on the edge of the stage, alone in the room. His heart pounded in his chest. Something held him back; he didn’t know what it was. But there were many, many reasons to say yes. One of the biggest was looking into his eyes.

We don’t always make the right decisions, but anyone who has studied Cognitive Dissonance Theory knows that if belief and behavior are in disagreement with each other, one or the other has to change. Douglas’ conscience continues to bother him as his life follows Alice down the rabbit hole. You’ll have to read the book to find out what happens.

There is room for modern life and Christianity. In fact, there is a profound need for believers to follow their conscience in modern society and to explain honestly why they did. It’s what we are here for. It’s what God wants.