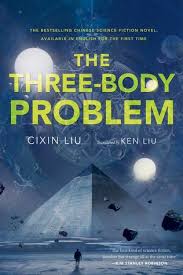 This book was a series of books I collected based on the fact that they won the Hugo Award in science fiction. In addition, the description sounded interesting.

The book is a part of a series that was originally written in Chinese, and was translated (quite effectively) by Ken Liu. Cixin Liu is celebrated in China as probably the most famous science fiction writer in that country. It gives the reader a very good and revealing picture of what being a scientist in Communist China must have been like, especially during the Cultural Revolution of the 1970s. In addition, it opened my eyes to things like the SETI project from a non-American perspective.

The book had a lot to offer, both in depth and in science detail. It’s what I would call very hard science fiction, and sometimes gets bogged down by the science. But if that’s what you want–the science part of science fiction–you will definitely get it here. It’s sometimes a bit slow, but it makes up for that with substance.

In the end, the story sets the stage for an alien invasion in a very real and frightening manner.

I give it three and a half stars out of five.