Stories that are written and rejected might be accepted somewhere else. Other stories that are never published turn up as material in other places and in many cases, other media, such as radio plays, screenplays or stageplays.

And sometimes you are surprised. 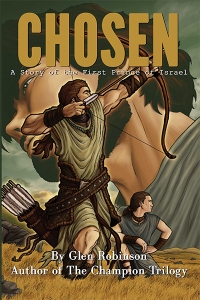 Years ago, at least 30 years ago, I had the idea for a Biblical story I wanted to write about David and Jonathan. It was one of those stories you tell and retell but never really get written down. It was one of those stories that I talked about and talked about for years. It was a story I had always been inspired about, simply because it raised the question: why do bad things happen to good people? It’s a question that people have a hard time answering today, and I felt it bore investigating in this story. The obviously good and faithful Jonathan was overshadowed and eventually superseded by his friend David. I tell the story from the perspective of Jonathan’s armorbearer, who I also have end up being the survivor of Saul’s followers. It goes from their childhood together all the way to Jonathan’s death, and beyond.

I wrote the first few chapters and outlined the rest, and presented it to my usual publisher about fifteen years ago. It was promptly rejected, along with many of my other ideas. That general tendency was what led to my move toward independent publishing in 2012. In 2014 I self-published Chosen, the Story of Israel’s First Prince.

It did so-so on Amazon. I discovered that while some Christians were interested in Biblical stories, many weren’t. I learned that the traditional publishing market that I had left still accepted this kind of book however. And while it disappeared on Amazon, it did relatively well on the Adventist Book Center market.

Now comes the surprise. I recently learned that the publishing house I had approached before had a new VP for editorial as of a few months ago. On a hunch, I proposed that they pick up Chosen as one of their book, with the possibility of turning it into a series that would include other Bible characters. Yesterday I received a contract for Chosen, and I have hope for further collaboration. The bad news is that I immediately had to pull Chosen from Amazon as an indie title. The good news is that I will get a lot more exposure in a relatively fresh market for this and my other titles.

It’s never death in writing. If anything, it’s reimagining.

One thought on “Born Again”