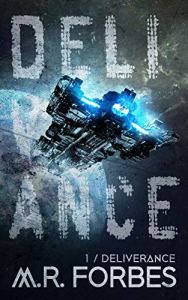 Once in a while I treat myself to my guilty pleasure of military science fiction for some brainless fun. That’s especially special when the book is offered free of charge, as was the case for Deliverance, courtesy of Amazon Prime. It’s the first in a series, and although I have a bad habit of starting series and not continuing them, I think I will continue with this one. I’ll tell you why.

First, here’s the summary from Amazon:

The war is over. Earth is lost. Running is the only option.
It may already be too late.

Caleb is a former Marine Raider and commander of the Vultures, a search and rescue team that’s spent the last two years pulling high-value targets out of alien-ravaged cities and shipping them off-world.

When his new orders call for him to join forty-thousand survivors aboard the last starship out, he thinks his days of fighting are over. The Deliverance represents a fresh start and a chance to leave the war behind for good.

Except the war won’t be as easy to escape as he thought.

Like many military sci-fi stories, Deliverance is mainly action, with little time for character or story development. As I have read through these stories, I’ve gotten more impatient with this fact, and I started to get the same feeling with this story. The first third of the book is nonstop action, with hardly a breath to explain anything. But after Caleb Card and his marines finally get on the ship, there is a little more opportunity to get some storyline. As I’ve mentioned, it’s the first book in a series, and there are a few loose ends that are left unanswered at the end, which I am assuming with come to play in later book or books.

What made me decide to keep reading the series was that the last few chapters include a twist that I didn’t anticipate at all, which I always love. I can’t tell you anything about it, but it changes the whole end of the story in such a way that it will make you want to know what happens next.

If there were any shortcoming in the book, it’s that with its breakneck speed, there was really no time to get to know the characters. I hope the author remedies that in the next book.

I give it four stars out of five.